- October 21, 2016
Graham Greene is one of the authors that I’ve read surprisingly little of. I know of the man, but there is no recollection of his work in my memories.

I was looking forward to reading his work, and decided to start with a collection of short stories by him that I chanced upon. The book is called The Basement Room And Other Short Stories, and I started with the first story in the book, ‘The Basement Room’. 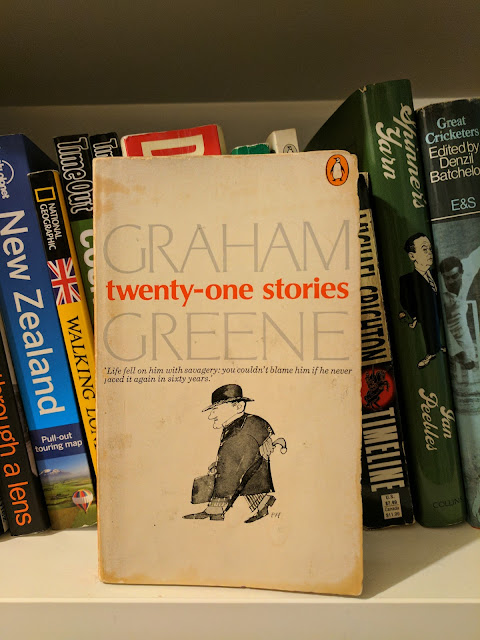 Regardless of what other works of Graham Greene I’d be getting my hands on, it’s pretty amazing to start with such a great work of his. I had no idea what to expect, from this story or from his works in general - and my experience was better for it!

The ‘plot’ is simple enough, and isn’t something I’m gonna dwell much over. A small kid, who’s between nurses, is left in the care of the butler and his wife (also an employee of the house) while his parents travel. To me this is a story about his being drawn into the adult world reluctantly - through gradual escalations and a crescendo event - with enough hints at how it ends up impacting him.

What’s fascinating to me is how effectively and efficiently things are conveyed from young Master Philip’s point of view. We experience the events with him, and have to find our own way to conclusions since a seven year old can only analyze so much, no matter how much is observed! So typical of a child to just take everything in, not knowing what to filter, and then leaving the processing of it to some unknown mechanism. Here the reader is that unknown mechanism who tries to process it all. There’s a lot of information packed in each page, about the settings, about what Philip is thinking - his fears, his perceptions, his plans, his actions, and most importantly, his understanding of each situation that he ends up in.

It starts with his sense of freedom. His parents are out, the old nurse is gone and the new one hasn’t started yet. He felt free and ‘alone’ even with Mr and Mrs Baines (the Butler and his wife) in the house, probably because he expected them to be busy with other stuff as well, unlike the nurse who’d be looking after him full-time. That he considered Mr Baines a friend was also helpful. He’s utterly fascinated at being able to move about through rooms in his own house, and the fact that no one would be tailing him was just icing on the cake. It is telling though that the two rooms he ends up going in are both occupied by the only other occupants on the house, but he’s happy because there was a semblance of choice. In his freedom he’d much rather choose who he spends time with (that would be Mr Baines), but there’s still a meek “Shall I call Mrs Baines?” uttered by him which means he isn’t quite out of her grips yet.
Many of Philip’s observations were as mature as his wishes were childlike. He dreamt of the happy times if it was just him and Mr Baines in the house, even willing to forego his favourite toys for being able to just hang out with Mr Baines. He felt a strange sense of responsibility towards Mr Baines, which was extremely childlike in its innocence. And his decision to ‘be good’ so Mrs Baines would be in a better mood - thus making life easier for Mr Baines - was again pure innocence. But then he was great at observing changes in behaviour, even if he didn’t completely comprehend them. His understanding of Mrs Baines attempts at winning him over with food, and his feeble attempts to resist her, were extremely contrasting in that sense.

It’s when he starts getting embroiled in the affairs of the adult - especially the Baines couple - that he starts experiencing some negative emotions. There’s the weight of a secret, the frustration at failure to keep said secret, and the intense remorse at being the cause of pain to Mr Baines (not that he was, except in his own head). He’s extremely inquisitive, as all kids are, and that’s how he actually comes about the secret he ends up spilling. This need to know what’s what ends up having a long lasting impact on him

“He was inquisitive and he didn't understand and he wanted to know. He went and stood in the doorway to see better, he was less sheltered than he had ever been; other people's lives for the first time touched and pressed and molded. He would never escape that scene. In a week he had forgotten it, but it conditioned his career, the long austerity of his life; when he was dying, rich and alone, it was said that he asked: "Who is she?”

and we’re only told the fag end of it, left to our own means to guess how the rest of his life panned out. The way he ‘explains’ it all is extremely interesting and rich in detail, but his reactions to it all are again true to his years. It was somewhat troubling to notice his slight sense of relief at the death he learns of, but his fear of seeing the dead body once again highlights just how vulnerable he is.

It was quite interesting to be on the roller coaster with young Philip, it reminded me of Mark Haddon’s “The Curious Incident Of The Dog In The Night Time” at some level. You start with a plot expecting the regular twists and turns, but end up getting a peek into the mind of a young boy, with all its innocence and maturity. Pretty fascinating.